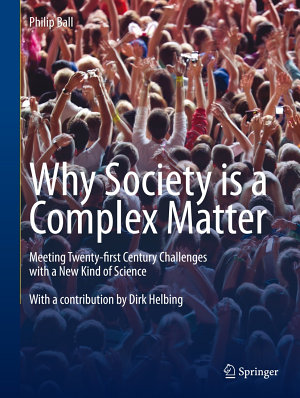 Society is complicated. But this book argues that this does not place it beyond the reach of a science that can help to explain and perhaps even to predict social behaviour. As a system made up of many interacting agents – people, groups, institutions and governments, as well as physical and technological structures such as roads and computer networks – society can be regarded as a complex system. In recent years, scientists have made great progress in understanding how such complex systems operate, ranging from animal populations to earthquakes and weather. These systems show behaviours that cannot be predicted or intuited by focusing on the individual components, but which emerge spontaneously as a consequence of their interactions: they are said to be ‘self-organized’. Attempts to direct or manage such emergent properties generally reveal that ‘top-down’ approaches, which try to dictate a particular outcome, are ineffectual, and that what is needed instead is a ‘bottom-up’ approach that aims to guide self-organization towards desirable states. This book shows how some of these ideas from the science of complexity can be applied to the study and management of social phenomena, including traffic flow, economic markets, opinion formation and the growth and structure of cities. Building on these successes, the book argues that the complex-systems view of the social sciences has now matured sufficiently for it to be possible, desirable and perhaps essential to attempt a grander objective: to integrate these efforts into a unified scheme for studying, understanding and ultimately predicting what happens in the world we have made. Such a scheme would require the mobilization and collaboration of many different research communities, and would allow society and its interactions with the physical environment to be explored through realistic models and large-scale data collection and analysis. It should enable us to find new and effective solutions to major global problems such as conflict, disease, financial instability, environmental despoliation and poverty, while avoiding unintended policy consequences. It could give us the foresight to anticipate and ameliorate crises, and to begin tackling some of the most intractable problems of the twenty-first century.

Why Society is a Complex Matter

Authors: Philip Ball
Categories: Science
Society is complicated. But this book argues that this does not place it beyond the reach of a science that can help to explain and perhaps even to predict soci

Why Society is a Complex Matter

Authors: Philip Ball
Categories: Science
Society is complicated. But this book argues that this does not place it beyond the reach of a science that can help to explain and perhaps even to predict soci

Complex Society: In the Middle of a Middle World

Authors:
Categories: Biology
Each issue of Transactions B is devoted to a specific area of the biological sciences, including clinical science. All papers are peer reviewed and edited to th

Observations on the efficient valuation of friendly societies

Authors: Jill Ford
Categories: Psychology
Originally published in 1983, this clear-sighted study built an understanding of what human behaviour meant at the time: an understanding which can still be of

Authors: Àngels Massip-Bonet
Categories: Technology & Engineering
The “language-communication-society” triangle defies traditional scientific approaches. Rather, it is a phenomenon that calls for an integration of complex,

Europe in a Global Context