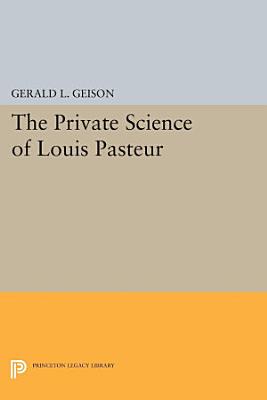 In The Private Science of Louis Pasteur, Gerald Geison has written a controversial biography that finally penetrates the secrecy that has surrounded much of this legendary scientist's laboratory work. Geison uses Pasteur's laboratory notebooks, made available only recently, and his published papers to present a rich and full account of some of the most famous episodes in the history of science and their darker sides--for example, Pasteur's rush to develop the rabies vaccine and the human risks his haste entailed. The discrepancies between the public record and the "private science" of Louis Pasteur tell us as much about the man as they do about the highly competitive and political world he learned to master. Although experimental ingenuity served Pasteur well, he also owed much of his success to the polemical virtuosity and political savvy that won him unprecedented financial support from the French state during the late nineteenth century. But a close look at his greatest achievements raises ethical issues. In the case of Pasteur's widely publicized anthrax vaccine, Geison reveals its initial defects and how Pasteur, in order to avoid embarrassment, secretly incorporated a rival colleague's findings to make his version of the vaccine work. Pasteur's premature decision to apply his rabies treatment to his first animal-bite victims raises even deeper questions and must be understood not only in terms of the ethics of human experimentation and scientific method, but also in light of Pasteur's shift from a biological theory of immunity to a chemical theory--similar to ones he had often disparaged when advanced by his competitors. Through his vivid reconstruction of the professional rivalries as well as the national adulation that surrounded Pasteur, Geison places him in his wider cultural context. In giving Pasteur the close scrutiny his fame and achievements deserve, Geison's book offers compelling reading for anyone interested in the social and ethical dimensions of science. Originally published in 1995. The Princeton Legacy Library uses the latest print-on-demand technology to again make available previously out-of-print books from the distinguished backlist of Princeton University Press. These editions preserve the original texts of these important books while presenting them in durable paperback and hardcover editions. The goal of the Princeton Legacy Library is to vastly increase access to the rich scholarly heritage found in the thousands of books published by Princeton University Press since its founding in 1905.

The Private Science of Louis Pasteur

Authors: Gerald L. Geison
Categories: Science
In The Private Science of Louis Pasteur, Gerald Geison has written a controversial biography that finally penetrates the secrecy that has surrounded much of thi

Authors: Aro Velmet
Categories: History
Why did "microbe hunters" at the Pasteur Institute become the most important health experts in the French empire in the early twentieth century? Pasteur's Empir

Authors: Linda Wasmer Smith
Categories: Juvenile Nonfiction
Louis Pasteur was one of the first scientists to understand the importance of microorganisms in causing diseases. He focused much of his research on how to prev

Louis Pasteur and the Hidden World of Microbes

Authors: Louise Robbins
Categories: Juvenile Nonfiction
Examines the life of the French scientist who proved the role of germs in causing disease, developed vaccines for anthrax and rabies, and invented the process t

A New History of Vaccines for Infectious Diseases

Authors: Anthony Robert Rees
Categories: Medical
A New History of Vaccines for Infectious Diseases: Immunization - Chance and Necessity covers the developments of vaccines and how they have obliterated many fa

Authors: Stephen Feinstein
Categories: Juvenile Nonfiction
Retells the life of the famous scientist, including his early life and education, his work on fermentation and microorganisms, and describes how his work lives

How to Win the Nobel Prize

Authors: J. Michael Bishop
Categories: Biography & Autobiography
"Alongside his own story, that of a youthful humanist evolving into an ambivalent medical student, an accidental microbiologist, and finally a world-class resea

Authors: Rene J. Dubos
Categories: Science
Dubos's classic biography of Louis Pasteur, originally published in 1960 and for several years out of print is once again made available in this new and expande