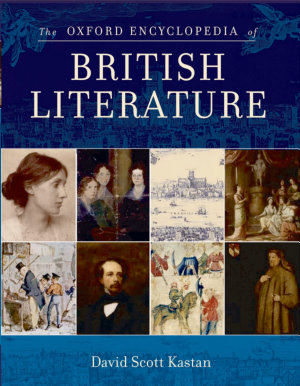 From folk ballads to film scripts, this new five-volume encyclopedia covers the entire history of British literature from the seventh century to the present, focusing on the writers and the major texts of what are now the United Kingdom and the Republic of Ireland. In five hundred substantial essays written by major scholars, the Encyclopedia of British Literature includes biographies of nearly four hundred individual authors and a hundred topical essays with detailed analyses of particular themes, movements, genres, and institutions whose impact upon the writing or the reading of literature was significant. An ideal companion to The Oxford Encyclopedia of American Literature, this set will prove invaluable for students, scholars, and general readers. For more information, including a complete table of contents and list of contributors, please visit www.oup.com/us/ebl