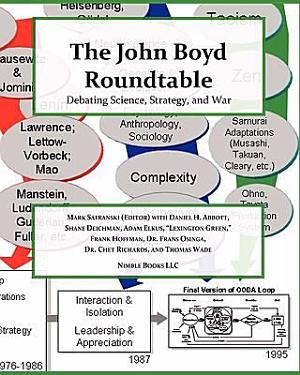 A collection of thought-provoking essays about the work of the late Colonel John Boyd, a fighter pilot who was one of the most influential figures in American military strategy in the last third of the Twentieth Century. This book had its origins in an online roundtable hosted at Chicago Boyz, a popular libertarian and conservative group blog founded by Jonathan Glewirtz. The roundtable attracted the participation of an impressive group of reviewers from the blogosphere and from scientific, academic and military fields. Authors whose essays are included in this book include Daniel H. Abbott, Shane Deichman, Adam Elkus, Lexington Green, Frank Hoffman, Dr. Frans Osinga, Dr. Chet Richards, Thomas Wade, and Dr. Frans Osinga, author of the leading scholarly work on Boyd. This book is essential reading for anyone interested in John Boyd and will provide important insights for anyone who is interested in military strategy and current affairs.