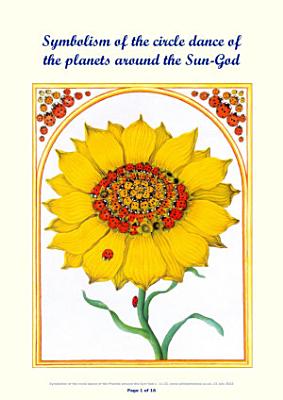 The world is asked to believe that, while the Planetary Angels of the Church are divine Beings, the genuine Seraphim, these very same angels under identical names and planets are the “false” Gods of the Ancients. The circle dance of the planets, prescribed by the Amazons for the Mysteries, is called “lascivious” when performed by the Pagans, but not King David’s reprehensible dance, during which he uncovered himself before his maid-servants in a public thoroughfare. It was David who introduced Jehovistic worship into Judæa, after sojourning so long among the Tyrians and Philistines, where these rites were common. Having borrowed Osiris from the Egyptians, the Church Fathers thought little of helping themselves to his brother Typhon. The seven-branched chandelier of the Israelites, as well as the “wanderers” of the Greeks, had a far more natural meaning, a purely astrological one to begin with. But, symbol for symbol, we prefer the sun to a candlestick. One can understand how the latter came to represent the sun and planets, but no one can admire the chosen symbol. There is poetry and grandeur in the sun when it is made to symbolise the Eye of Ormuzd, or of Osiris. One must forever fail to perceive that any particular glory is rendered to Christ by assigning to him the trunk of a candlestick in a Jewish synagogue. The chandelier represented the motion of the seven luminaries, describing their astral revolution. To the right and the left of that candelabrum projected six branches, each of which had its lamp, because the Sun placed as a candelabrum in the middle of other planets distributes light to them. There are two suns, a sun adored and a sun adoring. There are seven series of Cosmocratores, which are double: the higher ones are commissioned to support and guide the superior world; the lower ones, the inferior world. The Zoroastrians, Mazdeans, and Persians borrowed their conceptions from India; the Jews borrowed their theory of angels from Persia; the Christians borrowed theirs from the Jews. The Zoroastrian Aryans transformed the Devas, the bright Gods of India, into daevas or devils. It was their Karma that, in their turn, the Christians should vindicate on this point the Hindus. Then Ormuzd and Mithra became the daevas of Christ and Mikael, the dark lining and aspect of the Saviour and Angel. The day of the Karma of Christian theology will come in its turn. Hence, the latest interpretation by Churches that the seven-branched candlestick represents the seven Churches of Asia, and the seven planets which are the angels of those Churches. And yet, in the face of all this evidence, sun, moon, planets, are shown as being demoniacal before, and divine only after, the appearance of Christ. Then Jehovah then is made to be the Sun, and thence also the Christ of the Roman Church. The only point of difference between the exotericism of the Latin Church and that of the old Astrolators lies in the entirely arbitrary interpretation of emblems, symbols, allegories, and even names which have been shown to be identical in both.

Authors: Helena Petrovna Blavatsky
Categories: Religion
The world is asked to believe that, while the Planetary Angels of the Church are divine Beings, the genuine Seraphim, these very same angels under identical nam

Authors: H. Watanabe-O'Kelly
Categories: History
This is the first cultural history of Baroque Dresden, the capital of Saxony and the most important Protestant territory in the Empire from the mid-sixteenth to

The Message To The Planet

Authors: Iris Murdoch
Categories: Fiction
For years, Alfred Ludens has pursued mathematician and philosopher Marcus Vallar in the belief that he possesses a profound metaphysical formula, a missing link

Saving the Planet Without Costing the Earth

Authors: Donnachadh McCarthy
Categories: Nature
This is the only book that shows you how to make your life more environmentally friendly while also boosting your bank balance.

Authors: Mary Christison Huismann
Categories: Music
This work is part of a series which presents information on composers. Each volume offers annotated lists of all writings in major languages plus lists of works

Fall in Love, Have Children, Stay Put, Save the Planet, Be Happy

Reading Planet - Back at the Ballet - Turquoise: Comet Street Kids

Authors: Adam Guillain
Categories: Education
Comet Street Kids reading books follow the adventures of Rav, Asha, Tess and Finn, four of the residents of Comet Street. There are 72 exciting stories in the s

The Choreography of Antony Tudor

Authors: Rachel S. Chamberlain Duerden
Categories: Biography & Autobiography
The Choreography of Antony Tudor: Focus on Four Ballets presents both an analytical overview of the ballets created for the stage by Antony Tudor and an in-dept

Two Percent Solutions for the Planet