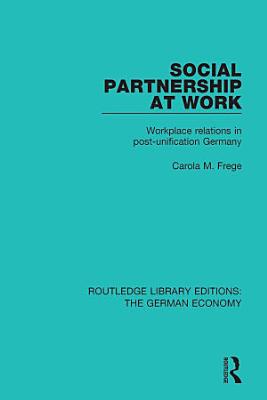 This book, originally published in 1999, provided the first comparative, in-depth analysis of workplace relations in east and west Germany. The collapse of communism and the ensuing process of reform means that East Germany provides a particularly interesting case, having experienced rapid and radical political and economic transformation, and representing an historically outstanding experiment of the shifting of an entire social system onto a different society. This book examines the success of the institutional transfer of west German labour organisations into east Germany workplaces and addresses central questions such as : Can capitalist labour institutions be imposed on a former communist workforce? What conditions determine the success or failure of these institutions? Can 'social partnership/ between capital and labour be learned?

The Realities of Partnership at Work

Authors: M. Upchurch
Categories: Business & Economics
A definitive study of partnership at work in the UK, with extensive surveys and interviews in organizations from the finance, NHS and local government sectors.

Authors: Bill Roche
Categories: Business & Economics
The partnership established between the Irish Airports Authority and its trade unions in the mid-1990s was groundbreaking in promoting union and staff involveme

Research Handbook on New Frontiers of Equality and Diversity at Work

Finding a Voice at Work?

Authors: Stewart Johnstone
Categories: Business & Economics
How much 'say' should employees have in the running of business organizations, and what form should the 'voice' take? This is both the oldest and latest questio

Social Partnership in the European Union

Authors: H. Compston
Categories: Political Science
This study examines the extent to which the development and operation of social partnership at EU level can be explained in terms of the logic of self-interest,