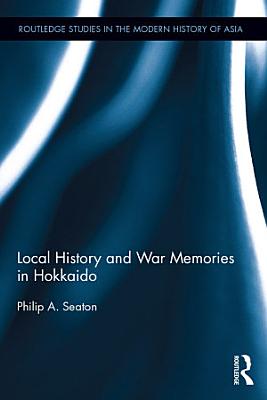 Hokkaido, the northernmost island of Japan, barely features in most histories of the Second World War. However, the combination of distinctive war experiences, a vibrant set of local historian groups, and powerful media organizations disseminating local war history, has generated an identifiable set of local collective memories. Hokkaidoʼs status as an early colonial acquisition also makes the island an important vantage point from which to reassess the course and nature of the Japanese Empire. This book argues that Hokkaido’s experiences of war and its militarized post-war constitutes a local case study with a much greater national and international significance on both theoretical and empirical grounds than first impressions might suggest. Using Japanese-language sources presented for the first time in English and a number of detailed local history case studies, it offers a fascinating and hitherto little-known perspective on the Second World War. It also combines a comprehensive theory of how war memories operate at the local level within a broad historical context that explains Hokkaidoʼs pivotal role within Japanese imperial history. Demonstrating that understanding local history and memories is essential for a nuanced understanding of national history and memories, the book will be highly valuable to students and scholars of Japanese history, Second World War history, and Asian history.

Authors: Garren Mulloy
Categories: History
Japan's post-war armed forces are a paradox, both embarrassing remnants of the past and valuable repositories of experience. This book charts the development of

The Routledge History of the Second World War

Authors: Paul R. Bartrop
Categories: History
The Routledge History of the Second World War sums up the latest trends in the scholarship of that conflict, covering a range of major themes and issues. The bo

Authors: Mark R. Frost
Categories: History
Over the past four decades, East and Southeast Asia have seen a proliferation of heritage sites and remembrance practices which commemorate the region’s blood

Authors: Blai Guarné
Categories: Social Science
From melodramas to experimental documentaries to anime, mass media in Japan constitute a key site in which the nation’s social memory is articulated, dissemin

On the Frontiers of History

Authors: Tessa Morris-Suzuki
Categories: History
Why is it that we so readily accept the boundary lines drawn around nations or around regions like ‘Asia’ as though they were natural and self-evident, when

Authors: Takayoshi Yamamura
Categories: Business & Economics
This is the first book to apply the concept of ‘contents tourism’ in a global context and to establish an international and interdisciplinary framework for