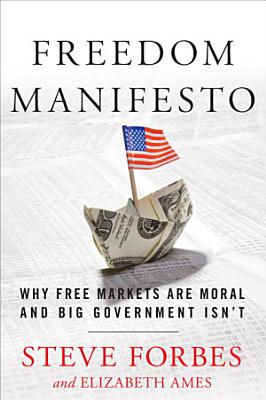 From Steve Forbes, the iconic editor in chief of Forbes Media, and Elizabeth Ames coauthors of How Capitalism Will Save Us—comes a new way of thinking about the role of government and the morality of free markets. Americans today are at a turning point. Are we a coun­try founded on the values of freedom and limited gov­ernment, as envisioned by the founding fathers in the Declaration of Independence and the Constitution? Or do we want to become a European-style socialist democ­racy? What best serves the public good—freedom or Big Government? In Freedom Manifesto, Forbes and Ames offer a new twist on this historic debate. Today’s bloated and bureau­cratic government, they argue, is anything but a force for compassion. Instead of assuring fairness, it promotes favoritism. Instead of furthering opportunity, it stifles economic growth. Instead of unleashing innovation and material abundance, its regulations and price controls create rigidity and scarcity. Not only are Big Govern­ment’s inefficient and ever-expanding bureaucracies ill-equipped to deliver on their promises—they are often guilty of the very greed, excess, and corruption routinely ascribed to the private sector. The only way to a truly fair and moral society, the authors say, is through economic freedom—free people and free markets. Throughout history, open markets have helped the poor and everyone else by unleashing unprecedented creativity, generating wealth, and raising living standards. Promoting trust, generosity, and de­mocracy, economic freedom has been a more powerful force for individual rights, self-determination—and hu­manity—than any government bureaucracy. Freedom Manifesto captures the spirit of a new movement that is questioning old ideas about the mo­rality of government and markets for the first time since the Great Depression. Going beyond the familiar explanations and sound bites, the authors provide a fully developed framework of “first principles” for a true understanding of the real moral and ethical distinctions between more and less government. This timely and provocative book shows why free markets and liberty are the only way to a better future and a fair and humane society.

Authors: Steve Forbes
Categories: Business & Economics
From Steve Forbes, the iconic editor in chief of Forbes Media, and Elizabeth Ames coauthors of How Capitalism Will Save Us—comes a new way of thinking about t

Authors: Audra J. Wolfe
Categories: Science
Closing in the present day with a discussion of the 2017 March for Science and the prospects for science and science diplomacy in the Trump era, the book demons

Authors: Scott Lucas
Categories: Cold War
Far from being just a policy of containment ensuring national security against the Soviet threat, US policy-makers sought a campaign which would vanquish the So

Authors: Timothy Reese Cain
Categories: Education
The is this the book-length work addressing the development of academic freedom and the procedures designed to protect it from the 1915 founding of the AAUP and

Taking on the World's Repressive Regimes

Authors: W. Korey
Categories: Political Science
A study of the Ford Foundation's support and of funding of human rights projects and NGOs, illuminating its extraordinary role in helping undermine and destroy

Authors: Various Authors
Categories: Political Science
This 26-volume set is a wide-ranging, time- and subject-spanning examination of the phenomenon of political protest. What drives people to take to the streets,

New Literary Hybrids in the Age of Multimedia Expression

Authors: Marcel Cornis-Pope
Categories: Literary Criticism
Begun in 2010 as part of the “Histories of Literatures in European Languages” series sponsored by the International Comparative Literature Association, the

Authors: Robyn Creswell
Categories: Literary Criticism
How poetic modernism shaped Arabic intellectual debates in the twentieth century and beyond City of Beginnings is an exploration of modernism in Arabic poetry,

Historical Dictionary of the Cold War

Authors: Joseph Smith
Categories: Political Science
“Cold war” was a term coined in 1945 by left-leaning British writer George Orwell to predict how powers made unconquerable by having nuclear weapons would c