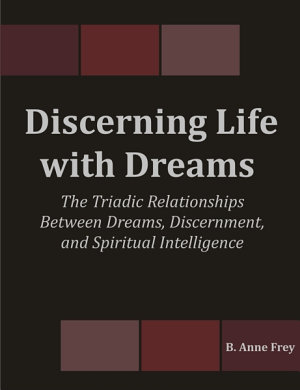 This study explored the relationship between dreams, discernment, and spiritual intelligence. It focused on the experience of people who use dreams to help them with spiritual discernment or decision-making in a spiritual context. A case study methodology included questionnaires, personal dream records, and interviews to understand the seven participants experiences of exploring their dreams for guidance. Participants were self-selected by answering an ad seeking people whose dreams had helped them to make a decision, who journaled their dreams, and who consider themselves to be spiritual. Most participants reported being drawn to dreamwork by a significant life experience. While participants shared different perceptions as to what discernment consists of, each participant reported that dreams helped them to grow spiritually. A number of outcomes were exemplified, falling into two main grouping: a) the use of discernment in order to understand a dream (whether or not they ended up reaching a resolution or making a decision about the dream) and b) the use of dreams as part of a discernment process (whether or not the dreams helped them to resolve their discernment issue or make a decision). The intensity of emotion attached to an issue seemed, for some, to render it more difficult to arrive at particular decisions. For others, dreams seemed to ease the burden of discernment or decision-making by raising their degree of confidence towards their resolution or decision. Deepening appreciation of and growing desire for living spiritually, and learning more about spirituality were indicators of a developing spiritual intelligence. For most, spiritual growth occurred through knowledge or learning gained from their dreams. For some, their belief about God s role in their life impacted their experience of the Divine in their dreams.Finally, the study showed that individuals are not always aware of what had helped them, suggesting a subconscious process at work in both discernment and decision-making. The study affirmed a triadic link between dreams, discernment, and spiritual intelligence among people involved in spiritual dreamwork. It demonstrated ways by which the discernment process can build confidence in people who are turning to their dreams for guidance in a spiritual context.

Discerning Life with Dreams: The Triadic Relationships Between Dreams, Discernment, and Spiritual Intelligence

Authors: B. Anne Frey
Categories:
This study explored the relationship between dreams, discernment, and spiritual intelligence. It focused on the experience of people who use dreams to help them

Authors: Gillian Holloway
Categories: Family & Relationships
What do your dreams really mean...for your love life? The Complete Dream Book of Love and Relationships is a groundbreaking guidebook for using what's already i

The Complete Book of Dreams

Authors: Pamela Ball
Categories: Body, Mind & Spirit
The most authoritative and comprehensive book available on dreams and dreaming. Enter the fascinating world of dreams, their mysteries, their meanings: to dream

The Elements of Dreamwork

Authors: Strephon Kaplan-Williams
Categories: Body, Mind & Spirit
People have always been fascinated and intrigued by what goes through the mind as we sleep. This book explains the most successful dreamwork methods; the major

Learn the Secret Language of Dreams

Authors: Pamela Cummins
Categories: Self-Help
Do you know that your dreams are special and unique? But if you don't understand their meaning, you are missing out on vital information. Because every night yo

Authors: Charles B. Nemeroff
Categories: Medical
This volume brings together the leaders in the field of PTSD research to present an up-to-date summary and understanding of this complex disorder. All of our cu

Create the Love of Your Dreams

Authors: Nanette Geiger
Categories: Family & Relationships
Learn how to Create the Love you've always wanted. It's never too late. You can do it now! Create the Love of Your Dreams is a Step-by-Step power-packed Relatio