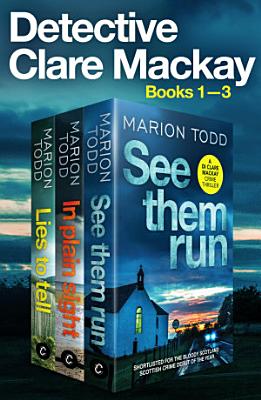 Uncover Scotland’s dark side in the brilliant Detective Clare Mackay series. Includes See Them Run, which was shortlisted for the Bloody Scotland Scottish Crime Debut of the Year 2020, and the next two books; In Plain Sight and Lies to Tell. See Them Run: On the night of a wedding celebration, one guest meets a grisly end when he’s killed in a hit-and-run. A card bearing the number ‘5’ has been placed on the victim’s chest. DI Clare Mackay, who recently moved from Glasgow to join the St Andrews force, leads the investigation. The following night another victim is struck down and a number ‘4’ card is at the scene. Clare and her team realise they’re against the clock to find a killer stalking the streets of the picturesque Scottish town. To prevent further deaths, the police have to uncover the link between the victims. But those involved have a lot more at stake than first meets the eye. If Clare wants to solve the case she must face her own past and discover the deepest secrets of the victims – and the killer. In Plain Sight: When a baby girl is snatched from the crowd of spectators at a fun run, the local police have a major investigation on their hands. DI Clare Mackay and her team are in a race against the clock when they learn that the child has a potentially fatal medical condition. As Clare investigates she realises this victim wasn’t selected at random. Someone knows who took the baby girl, and why. But will they reveal their secrets before it’s too late? Lies to Tell: Early one morning DI Clare Mackay receives a message from her boss DCI Alastair Gibson telling her to meet him in secret. She does as he asks and is taken from St Andrews to a secure location in the remote Scottish hills. There, she is introduced to ethical hacker Gayle Crichton and told about a critical security breach coming from inside Police Scotland. Clare is sworn to secrecy and must conceal Gayle’s identity from colleagues until the source is found. Clare already has her hands full keeping a key witness under protection and investigating the murder of a university student. When a friend of the victim is found preparing to jump off the Tay Road Bridge it is clear he is terrified of someone. But who? Clare realises too late that she has trusted the wrong person. As her misplaced faith proves a danger to herself and others, Clare must fight tooth and nail to protect those she cares about and see justice done. A page-turning crime thriller series perfect for fans of Alex Gray, D. K. Hood and Rachel Amphlett. Praise for Marion Todd ‘A satisfying Scotch mystery.’ The Times Crime Club Pick of the Week ‘A fifth outing for agreeable Scottish detective DI Clare Mackay proves Dundee-based Todd is becoming a master of the Tartan Noir genre.’ Daily Mail ‘The latest in this series from the brilliant Marion Todd is just as nail-biting and tense as her fans have come to expect. A police procedural with lashings of thrills and kills, along with plenty of good humour.’ The Sun ‘Suspense loaded from start to finish – Marion Todd couldn’t have delighted us more.’ I AM IN PRINT magazine ‘Marion Todd’s welcome addition to the genre feels like a breath of fresh, tartan noir air.’ Scottish Field ‘Beautifully written... Characters and plot are superb. Would highly recommend to all.’ ⭐⭐⭐⭐⭐ Reader review ‘One of my favourite police procedural series.’ ⭐⭐⭐⭐⭐ Reader review ‘Marion Todd... is a gifted storyteller who can provide readers with thrills, sophistication and a story packed with substance. A very highly recommended five star read.’ ⭐⭐⭐⭐⭐ Reader review

Authors: Marion Todd
Categories: Fiction
SHORTLISTED FOR THE BLOODY SCOTLAND SCOTTISH CRIME DEBUT OF THE YEAR 2020 In a famous Scottish town, someone is bent on murder – but why? On the night of a we

Authors: Marion Todd
Categories: Murder
A murder victim with celebrity connections spells trouble for DI Clare Mackay...Gaby Fox is known to many due to her successful TV career, so when her brother a

Authors: Marion Todd
Categories: Fiction
DI Clare Mackay is about to face a test of her loyalty... When a report comes in that a van containing two prison officers and a convicted jewel thief is missin

Authors: Marion Todd
Categories: Fiction
DI Clare Mackay starts the new year with a death... It is the stroke of midnight on Hogmanay when Alison Reid admits a caller to her home. When her death is lat