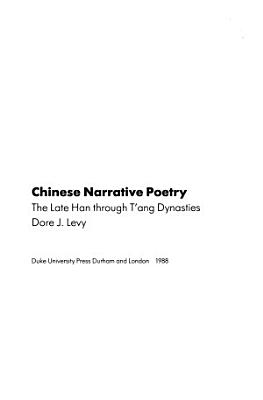 Chinese Narrative Poetry brings a new perspective to some of China's best-loved and most influential poems, including Ts'ai Yen's "Poem of Affliction," Po Chu-yi's "Song of Everlasting Sorrow," and Wei Chuang's recently discovered "Song of the Lady of Ch'in." Composed in the shih form during the Late Han, Six Dynasties, and T'ang periods, these poems stand out as masterworks of narrative art. Yet paradoxically, their narrative qualities have been little recognized or explored in either traditional Chinese or modern Western scholarship. The reason for this neglect is that Western literary traditions acknowledge their origins in epic poetry and thus take narrative for granted, but the Chinese tradition is fundametally based on lyric and does not admit of a separate category for narrative poetry. Drawing on both classical Chinese critical works and the most recent Western contributions to the theory of narrative, Levy shows how narrative elements developed out of the lyrical conventions of shih. In doing so, she accomplishes a double purpose, guiding the modern reader to an understanding of the nature of narrative in Chinese poetry and shedding light on the ways in which Chinese poets adapted the devises of lyric to the needs of a completely different expressive mode. Students of Chinese literature will welcome this pathbreaking study, but Chinese Narrative Poetry will interest other scholars as well because it addresses questions of crucial importance for literary theory and comparative literature, particularly the central issue of the applicability of Western critical concepts to non-Western literature and culture.

Authors: Jerry D. Schmidt
Categories: Literary Criticism
In The Poet Zheng Zhen (1806-1864) and the Rise of Chinese Modernity J. D. Schmidt provides a study of one of the China's greatest poets and a major architect o

Authors: Julia K. Murray
Categories: Art
“Fascinate is a riveting journey through the forces of fascination—how it irresistibly shapes our ideas, opinions, and relationships—and how to wield it t

A History of Contemporary Chinese Literature