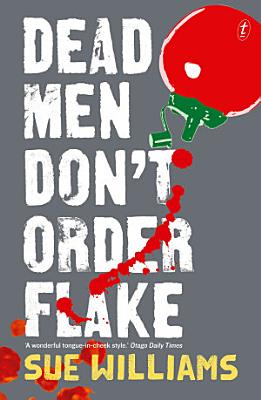 On the night Leo Stone returns—notionally from the dead, in reality from the Democratic Republic of the Congo—Cass Tuplin gets a call from Gary Kellett. A call about an actual dead person: Gary’s daughter, killed in a car crash. Gary’s adamant it wasn’t an accident. Cass agrees to investigate. After all, not just Rusty Bore’s only purveyor of fine fast food, Cass is also the closest thing to a private detective within a couple of hundred k’s. The local police (Cass’s son Dean) try to warn her off. It’s true Cass’s status as a celebrated yet non-licensed nobody doesn’t entirely suit Dean. But Dean also believes Gary’s a delusional, grieving father. Is that the case? Or did a young journalist die after asking too many questions? Cass intends to find out. As soon as she’s dealt with some queries raised by the reappearance of Leo Stone. Sue Williams is a science writer and chartered accountant who also holds a PhD in marine biology. She lives in Melbourne with her husband. Her first Cass Tuplin mystery, Murder with the Lot, also published by Text, was shortlisted in the Ned Kelly Awards. ‘There’s a wry, satirical element to much of Williams’ humour...In the grand tradition of cosies, [Cass is] a woman underestimated at your peril...Fun and often charming crime fiction, thanks to its winning super-sleuth heroine.’ Saturday Paper ‘Williams captures small town Victoria with ease and her plot has enough twists and red herrings to keep it interesting. Fans of Murder With The Lot will not be disappointed, and no doubt will be hoping for more of Cass Tuplin. An excellent sequel!’ BookMooch ‘Once again, Williams has created a small-town mystery with big repercussions with the wacky, loveable characters who fill Rusty Bore making a comeback in this novel.’ Weekly Times ‘An enormously enjoyable and pacy novel set in a speck of a country town in rural Victoria, with a plucky amateur sleuth amid a quirky ensemble of townsfolk and family. Quintessentially Australian without being overcooked.’ Abbey’s Bookshop ‘[A] finely wrought and highly amusing crime novel...Williams has created a wonderful new series in the comedy crime genre. Dead Men Don’t Order Flake is a multilayered yarn that mines the rich ore of regional Australia and I can’t wait for the next Cass Tuplin adventure.’ Australian ‘Williams has put together a recipe for madcap adventure the main ingredient an engaging female lead whose nosiness solves the mysteries of her tiny hometown.’ Adelaide Advertiser ‘This book is pure entertainment the author captures the quirky ways of small town Australia perfectly, well, apart from murder that is, we don’t get too many of them in these parts.’ Audiothing ‘Smoothly written with plenty of humour, and some wry observations by Cass, this is an enjoyable, off-beat crime novel with a good cast of characters and a nicely paced storyline.’ Sydney Morning Herald

Authors: Sue Williams
Categories: Fiction
On the night Leo Stone returns—notionally from the dead, in reality from the Democratic Republic of the Congo—Cass Tuplin gets a call from Gary Kellett. A c

Authors: S.N. Bronstein
Categories: Juvenile Fiction
Scooter and Nugget cannot be content like most other house cats eating, sleeping, and annoying their humans. These two sisters, who just happen to speak English

Index to Crime and Mystery Anthologies

Authors: Steve Hamilton
Categories: Fiction
A superb new Alex McKnight novel from Edgar award-winning author Steve Hamilton. It is February in Paradise, Michigan, and for the first time since moving there

The Devil's Guide to Hollywood

Authors: Joe Eszterhas
Categories: Performing Arts
Mike Ovitz told him his Wilshire Blvd. "foot soldiers" would hunt him down. He's antagonized almost everyone at the top in Tinseltown. And now, Joe Eszterhas te